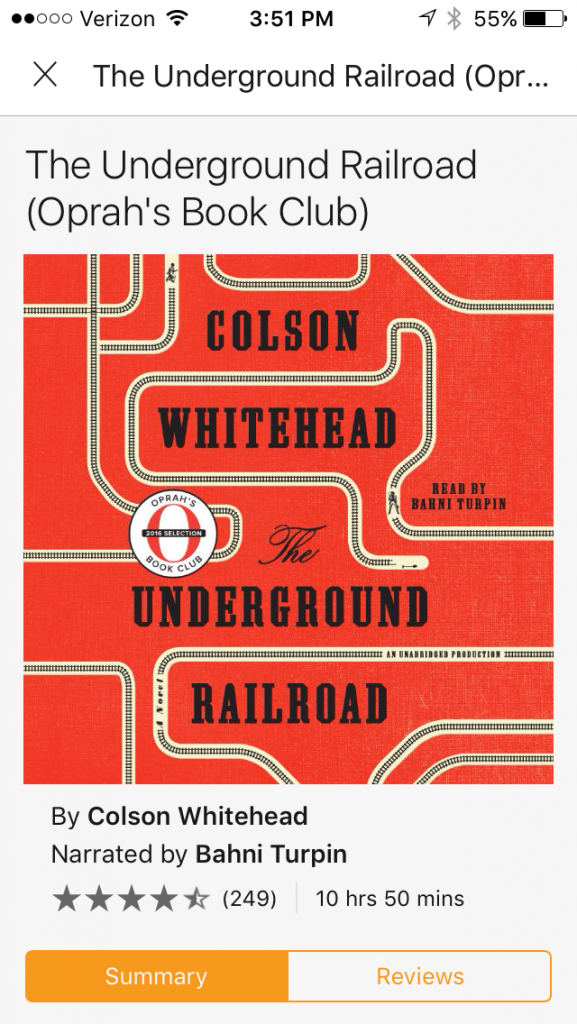 If you are a book lover, you most likely have heard the buzz about The Underground Railroad. The book was originally scheduled to be published in September 2016 but during the summer, Oprah announced that the book would be her pick for the Oprah’s book club (her first pick in a year). The publisher pushed the release date up to August and ordered several additional printings of the book.

The novel tells Cora’s story, a teen-age girl enslaved on a Georgia plantation. Her grandmother died in those fields picking cotton and her mother Mabel escaped from the plantation when Cora was 10. When Cora is 16, or maybe 17, she doesn’t know for sure, another slave, Caesar, suggests to Cora that they run away from the plantation.  Their escape via the Underground Railroad begins a liberating, terrifying, and sometimes brutal journey north toward freedom.

Cora first arrives in South Carolina where she finds domestic work for a white family. Running is dangerous but staying put has its own share of perils so Cora moves on with stops in North Carolina, Indiana and Tennessee. These perils include cramped, unsafe living quarters, bounties offered for the return of escaped slaves, beatings, and public lynching.

Cora is pursued mercilessly by slave catcher Ridgeway who has a chip on his shoulder because he failed to capture Mabel and return her to the plantation when she escaped years before. Ridgeway’s maniacal obsession with capturing Cora and returning her to the Randall Plantation shadows over Cora every step of the way.

Cora is a fierce woman. Whether she is protecting her garden plot or fighting off attackers Cora’s toughness is present throughout the story. It’s inspirational. She is a character that I won’t soon forget. I would highly recommend that you read this book. It’s important. The struggles and atrocities experienced by African Americans that are described in the book are still relevant today.

But in addition to the topic being important the writing is terrific. Whitehead is a wonderful storyteller. You should consider picking up a few extra copies to give as gifts to your literary minded friends and family too. President Obama has The Underground Railroad on his summer reading list too.